Winter Storm 2021@home is a film about the people and the music of the greatest annual event on the piping and drumming social calendar, held every January in downtown Kansas City, MO, USA. Over the 20 years since its inauguration, it has evolved into a world class few days of piping and drumming contests and workshops, culminating in a unique Saturday evening concert where the world's best perform on the same stage. Performances by Fred Morrison, Williie McCallum, Jack Lee, Stuart Liddell, Callum Beaumont, Alastair Lee, Andrew Douglas, Roddy MacLeod, Matt MacIsaac, Roddy S MacDonald, Alen Tully, St. Laurence O'Toole Pipe Band, Steven Creighton, Steven McWhirter, Duncan Millar, Eric Ward, Christina Hanks, Simon Hodgett, Andrew Douglas. This is their story -  a glimpse of the people, the music, the volunteers, the sponsors - all part of the Winter Storm family.
Post a Comment
Read more

How the Brain Functions (or doesn’t) When Reading Music

Are you tied to the written score, always wanting to read the music... if so, then you have a huge memorization impediment. The brain really isn’t doing much! The optical nerve takes up most of the brain power and the memory function lies unused. Get away from the music and play from memory as soon as you can. Brain scans show the difference in activity once this is done!
Post a Comment
Read more

Post a Comment
Read more
- September 16, 2018
Chapter 3 -  Brasil Caledonia The new generation of players that was under training was still not ready when the band started to compete in 2010 in the newly created South American pipe band competition, promoted by SPBASA. The band finished last, with Argentina’s Highland Thistle band deservedly winning first prize. However, two years later, in Buenos Aires, another South American competition took place and by then we could field some very good players of our new generation of pipers and drummers. The band won that contest becoming Brazil’s first SPBASA Cup champion and capturing also the trophy for the best pipe corps. The South American championships was to remain our main competition objective for the next few years, as it was much more financially accessible for our band than traveling to compete in the UK. And we were still having a taste of a real Scottish competition, as the adjudicators were brought from UK and North America. In 2015, Brasil Caledonia were hosts to
Post a Comment
Read more 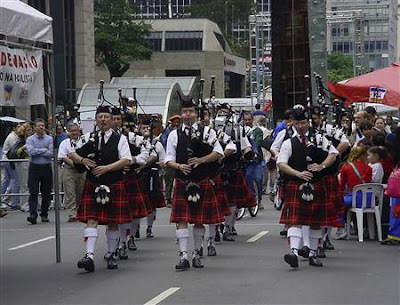 Chapter 2 The Scottish Link Pipe Band (SLPB) came into being in July 1995, with five pipers and four drummers, at a musical festival held in the mountain resort of Campos do Jordão, state of São Paulo. The place and occasion had been carefully selected by Cristiano Bicudo to attract powerful sponsors that would ensure logistic support and the flow of more funds to the band in the following years. British Airways, Johnnie Walker Red Label and Cultura Inglesa were in their mighty sponsorship portfolio. This plan, as well as the training programme, proved both so successful that the band doubled its size in 1996 and it considered traveling to Scotland to compete. In August 1997, the SLPB with a crew of fourteen players, made its debut   at the grade 4 competition in Perth, and a week later at the World Championships on Glasgow Green, the very first time a South American band had  competed at the Worlds. Even Drum-Major Ronaldo Artnic competed in Perth! Competition results were
Post a Comment
Read more 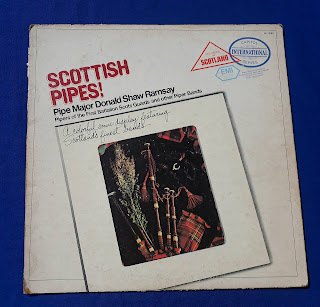 Chapter 1 His  interest in the pipes started in 1982, when he was 14. This is more or less the age when teenagers decide to try some instrument to play in a rock band. However, after digging for some vinyl in a record shop in São Paulo, something else captured his attention: an LP published by the Capitol International Series with the generic title “Scottish Pipes!”, including tracks with solos by P/M Donald Shaw Ramsay. Pipe Major Donald Shaw Ramsay This is Cristiano Bicudo's story, as related by himself, so read on! There were also tracks with pipe bands (City of Glasgow Police PB and 2 nd Batt. Scots Guards) in that same record, but those were not very catchy as the quality of the open air recording was not really good. However, P/M Ramsay’s solos, and in particular his Sean Truibhais, left such an impression on me that I was soon pressing my parents for some support to learn the pipes. Both mum and dad were supportive (lucky me!), but I would soon discove
Post a Comment
Read more
- January 24, 2018 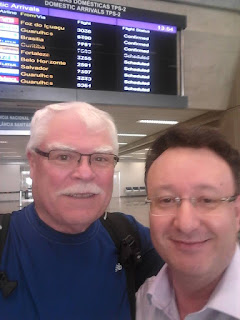 Piping in Brazil Introduction Cristiano Bicudo and Myself This past October I had the wonderful opportunity to travel through Brazil with Cristiano Bicudo. We met in Rio de Janeiro, travelled to Petropolis, back to Rio and on to Sao Paulo, with a couple of days spent in the modern capital of Brasilia; a 22 day experience. I asked Cristiano to follow up with his understanding of the history of piping in Brazil, so that those not familiar may appreciate the rich pedigree of events, bands and people along the way. Preface A Brief History of Highland Piping and Drumming in Brazil by Cristiano Bicudo, Sao Paulo, Brazil The first pipers to arrive in Brazil were Portuguese at the time of our discovery in 1500. They obviously did not play Highland pipes but their own Portuguese version of the instrument. Galician piper Carlos Nunez developed an interesting theory, by which he claims that the Northeast of Brazil kept elements of the original music of Celti
Post a Comment
Read more
More posts