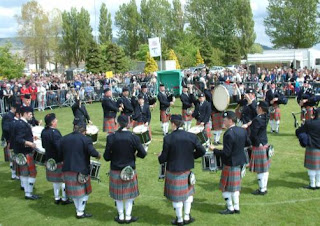 I have heard it all now.... announced on the PD Online tonite was a vote-in poll for the best bass section at the 2008 World's.... now give me a break and give the pipe band community some space. Just at the time pundits are criticizing the contest format, the judging format and the concept of the qualifier, the PipesDrums Online posts this charade? Holy smokin', I just can't get my head around the concept of judging by international opinion. Come on guys...get your thoughts in gear. Lead drummers like Reid Maxwell, Jim Kilpatrick and Drew Duthart have won the World's by adjudication. What creditibilty would they have if they were issued their prize by an online poll? I can see it now - winners of the World Pipe Band Championship and the Julilee trophy - by the vote of no one who was there - SFU...... where's the thinking here? And who are the smart ones? ... anybody who does not participate and only recognizes the real thing - a World's adjudicated on Glasgow Green, plain and simple!

Boney said…
I agree. People that did not listen to the entire contest should not have an opinion on the who the winner should be.
November 3, 2008 at 12:21 AM

I'm sure that those in favour of the Best Bass-Section prize would prefer to have it judged on Glasgow Green on the day by RSPBA judges. But it's not, and it won't be until the RSPBA reinstates the award. Besides, there are no designated mid-section judges anway; just snare drumming and ensemble judges who all too often forget to listen to the mid-section closely, and then the prize becomes an after-thought when the judges are reminded that it needs to be awarded.

Having thousands of readers vote based on what they hear and see after concentrating on each mid-section itself via the World's recordings isn't the best approach, but at least it's an approach, and it seems to have the approval of several mid-section pioneers.
November 3, 2008 at 9:32 AM

The Captain's Corner said…
The point here is not the awarding of a bass prize at the RSPBA majors. It is more the issue of how the result is obtained. Now I agree with Andrew and many others that the award should be reinstated. But there has to be legitimate adjudicators trained for mid-sections specifically and due process put into effect. A popularity poll that permits anyone to vote even if they have not heard the CD / DVD or attended the actual event reduces any prestige the award might carry. Admittedly, it might be the only alternative at present, but we cannot put this on the shelf beside other World titles like the the Grade 1 Pipe Band, Pipe Band Drumming and the Solo Drumming Championship events, adjudicated by accredited professionals.
November 3, 2008 at 10:00 AM

Unknown said…
I think it's a harmless novelty; though, maybe not the ideal way to build cred. I wonder if the online organizing guys would have been better served hiring a panel of respected percussionistas - and pass along a DVD to each? Just a thought.

Anonymous said…
My iphone allows me to vote once at each wireless network I connect to. I have five browsers on my phone and have been to 10 hotspots so far. Go Hoss!
November 3, 2008 at 3:57 PM

Iain MacDonald said…
I'm not sure this merits much huff and puff. Maybe they should call it "The Peoples' Choice" Best Bass Section Award, and that would be good enough? And anyway, there are some pretty big names in pipe band judging who regularly, and obviously, get it wrong at the Worlds, so how can this be that different? Training and judging certification only count if you can give a decent result. Quite a few can't, paper be damned.

And Boney, I did listen to the whole thing live, and I would select KT and the SFU mid-section this year. Outstanding.
November 3, 2008 at 5:29 PM

Anonymous said…
Andrew Berthoff makes a good factual point saying that there are no mid section judges that have been designated by the RSPBA. My question is, why not? With the explosion and rebirth of flourishing and rythymic tenor and bass performances that definately enhance the band performances as a whole, isn't it time for the RSPBA to offer to have such judges? There is one problem with the whole thing, though. Some of the qualified people who could do the actual judging are still actively competing with pipe bands. Would the ones who are so desirous of having the sections judged properly and fairly, be big enough to step up, become certified and step out of the playing circle for the betterment of the art to get it judged and included in the final scoring? Its very hard to ask someone who is at the top of their game to stop doing what they love to do to look at the bigger picture for the future of midsections. If that did become a reality, would the midsection score be different from the snare score and tallied to count as another judge and placing, or would the midsection just receive a sheet with comments and someone on the field to make the call to see what band wins best bass/midsection? Just thinking out loud...respectfully submitted.

Hossman said…
Captain, my Captain.
it was you who kissed me square on the lips in "96 when The Best Bass Award was the only sniff that DeadRock's 78th's got!

As dust collects on the trophies in the basement of the office, so to has a huge piece of Pipe Band history gone by the wayside.
They won't be entertaining any of your ideas to make it better. Not in my lifetime.
BTW the drumming prize is next on the chopping block. Anything to shorten the closing ceremonies.
Don't take this as a threat to your job as an adjudicator. They LUUUUV you, they'll have you back!
Reinstate?? not likely.
Accreditation?? questionable.
As my good friend Jim Blackley once said.
I'll write their test if they'll write mine.
Lots of Luv always Hossman,
November 4, 2008 at 4:37 PM

Anonymous said…
Although I agree this award needs to be reinstated , I fear this process will turn into a popularity contest. I also worry the process is flawed , although it disappears with a thank you once you vote, click on any link within Pipesdrums and you can vote again and again and again.........was this done for a reason?
November 4, 2008 at 5:11 PM

The Captain's Corner said…
Hossman...well I remember...and the thrill of the prestige of that award as well, regardless of how it was judged.... my point here is exactly the prestige of a true World's Bass Section Award..this is what I would like as well...as in the past. The award was initiated with that in mind. I would say that the current thread is swaying more to the understanding that the Hossbilt trophy for the time being is truly a Peoples' Choice Award, not the World's by any means... and I support this completely. But what I hope for is not the present reality - bring in an accurately judged event within the confines of the World's Championships. I truly believe that you, Scott and me are really saying the same thing... I think the PD editor picked up the wrong meaning from my post. I was really questioning the PD Poll itself,and this format to select the World's Champion, as his initial post implied... and I think good responses will bear that out...always good to hear from you...captain
November 4, 2008 at 7:39 PM

Anonymous said…
Accredited mid-section adjudicators. Interesting thought. I was just thinking of how many current drumming adjudicators that I know of have/do led/lead or tutored/tutor drum corps. How many are snare drummers exclusively? I consider myself a snare drummer, though I have played both bass (in my early years) and tenor (two weeks ago) at national championships level. I must admit that my adjudicating of drumming (and ensemble) will be enhanced by my stint as a competition tenor drummer! I don't suppose there are many out there like me though?
November 19, 2008 at 8:51 PM

Popular posts from this blog

How the Brain Functions (or doesn’t) When Reading Music

Are you tied to the written score, always wanting to read the music... if so, then you have a huge memorization impediment. The brain really isn’t doing much! The optical nerve takes up most of the brain power and the memory function lies unused. Get away from the music and play from memory as soon as you can. Brain scans show the difference in activity once this is done!
Read more 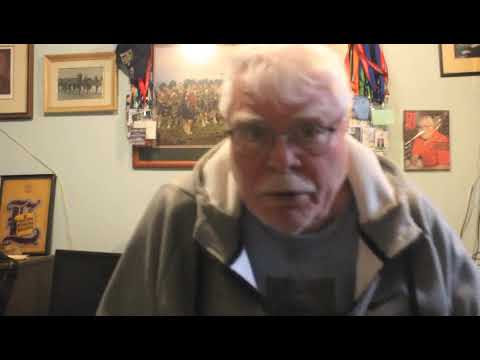